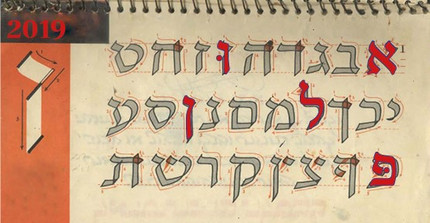 The Summer School for Modern Hebrew of the School of Jewish Theology offers intensive language courses at four different levels from July 29, 2019 to August 16, 2019.

Małgorzata Kordowicz holds an M.A. from Warsaw University's Department of Hebrew. She taught this language and culture in various places, including Warsaw University (2005-2007) and the Jacek Kuroń Multicultural High School (2006-2012). Prior to her studies at the Jewish Theological Seminary, she was a faculty member in the Division of Jewish History and Culture in the Department of Humanities at the Maria Curie-Sklodowska University in Lublin and worked for the Jewish Community of Warsaw as Jewish Culture Specialist. For 15 years, she was a member of editorial staff of several Polish-Jewish magazines. She got her rabbinical ordination from JTS in May 2016. She is currently employed as a rabbi by the Jewish Community of Warsaw.

“Sfatenu” (volume containing a reprint of a pre-war Hebrew primer with an introduction and a contemporary part, 2005, second edition 2015)

over 50 commentaries to weekly Torah portion published in “Midrasz”

Office hours during the semester break by appointment.